What energy source is relatively inexpensive to obtain, can be easily stored for future use, and is the cleanest burning of all fossil fuels? Only one fuel fits the description – natural gas! What techniques are used to explore for natural gas – and just what is natural gas? Learn all about it in the sections below!

The Fossil in Fuels

What put the “fossil” in fossil fuels?

Scientists speculate that for millions of years, the Earth was covered mostly with water and swamps, with areas of intense volcanic activity and ice caps. Wreathed in clouds of various gases, it really must have been an interesting place. The great expanses of water and swampland were said to have contained primordial plants and animals that lived out life cycles and sank or drifted to the sea or swamp floor. Soon covered with tons of sand or mud, these sea creatures through the centuries decomposed yielding valuable oil, coal and natural gas.

Each layer of decaying, then fossilizing, materials added to the next, interspersed with mud or sand. Buried under tons of debris, aided by tiny bacteria, and “cooked” by the heat and the pressure of each ensuing layer, these early plants and animals reverted back to earth’s basic elements, carbon and hydrogen.

How did decomposing creatures or plants turn into coal, oil, or natural gas? Let’s sort it like ingredients for two different recipes. In those early swamps of giant ferns and tall trees, plant material died and became covered with water. The material decayed under the damp heat and pressure, and ended up as really big chunks of carbon, or coal. The entire time period this was taking place has been named by scientists, the Carboniferous period.

How Natural Gas is Formed

Scientists propose that the formation processes for natural gas and petroleum were much the same as in coal: that layers of decomposing materials were interspersed with layers of mud and sand, but with different results. The resulting “creature composition” was more fluid or gaseous, working through the more permeable layers of the earth, sometimes all the way to the surface.

More often, pools of petroleum or deposits of natural gas are located below the Earth’s exterior. Modern technology looks for signs of oil and natural gas deposits in sandstone (sand pressured to form a type of rock) or limestone (would you believe, formed from the skeletons of the sea creatures?)

How do engineers search for pockets of natural gas? They turn to the experts in “good vibrations” – the seismologists.
Seismology is a branch of science that studies the Earth’s movements, namely earthquakes. Applications of this technology range from studies of plate tectonics to surveys of land for structures like dams or buildings. The natural gas industry uses seismology to go hunting for pockets of natural gas.

Here’s how it works: Seismologists look for pockets of gas in places near petroleum deposits and in formations of porous rock like limestone and sandstone.

Seismologists record waves of sound they generate mechanically, either by explosion or by the vibrations resulting from pile-driver-like thumper trucks.

The sound waves travel through or are bounced off of different formations. The idea is to locate sandstone pockets called “lenses” that often contain natural gas.
Seismologists can judge how long the lenses are, and how deep and how wide they are using readings taken from special recording instruments. The devices for hearing the reflected sounds are called – what else would you call an instrument designed to record “sounds in the Earth” – geophones!

Now That We’ve Found It, What Do We Do With It?

Hundreds of years ago, Chinese merchants used bamboo pipes to bring natural gas to fire burners under huge vats of sea water. The water boiled, evaporated, and left deposits of a valuable commodity, salt. “Eternal fires” mystified visitors to shrines in Western Asia. Surface pools of oil were exploited by the ancients, while night visitors to swamps were startled by flares of “swamp gas” or methane.

By 1609, Belgium scientist Jan van Helmont had named gas, “gas”, but it wasn’t until 1792 that British inventor William Murdock figured out a system for putting gas to use on a broad scale – devising a lighting system for buildings. Murdock used the gas light system to brighten up murky English cotton mills.

A Lot of Pipe

Delivery systems for the gas were organized, resulting in the development of the first documented gas company formed in England in 1812.

By 1817 the first gas company in the United States was established in Baltimore, Maryland, with its primary function being street lighting. The first commercial gas well in the United States was drilled in Fredonia, New York, in 1826, and for the next fifty years, natural gas was a major energy resource. But by the late 1870s, the expanded use and novelty of electricity had put a slight dent in the use of natural gas.
During the first three decades of the twentieth century, natural gas was still being transported through wooden pipes, and also, like the early Chinese, through bamboo. Consumers could only take advantage of this fuel if they were within a certain distance from its source. Once the modern system of long-distance technology and pipe welding was perfected, natural gas could be transported to consumers just about anywhere. In the United States alone, there are almost two million miles of pipe.

The auto industry uses huge gas ovens to bake on painted finishes for their vehicles and to harden and temper mechanical gears. As an energy source, gas is used to bake bricks, to fuel steel and glass works, and to make paper and cloth.

Natural gas is a versatile and clean-burning energy source that can be used almost anywhere for any industry. What can’t natural gas do? Its large reservoirs can’t be easily reproduced – making the resources finite. Scientists predict that at present usage rates, supplies will be exhausted in less than a century. However, through wise energy use, natural gas supplies can be made to last twice as long.

The Natural Gas Industry: Certainly Not All “Boring” Work

The many members of the gas industry work together to bring this valuable energy resource to consumers as quickly, safely, and inexpensively as possible.

Initially, deposits of natural gas must be discovered. The exploration team consists of representatives from almost every branch of science and includes chemical engineers, biologists, seismologists, and mathematicians. The scientists are joined by the drilling experts who build derricks of steel and direct drill bits and pipe through hundreds of feet of rock and sandstone.
Drilling platforms must be constructed to withstand high winds, bad weather, or drifting chunks of ice. Connections must be made to pipeline systems and pipelines must be maintained. 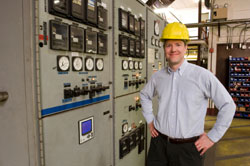 Efficient delivery systems must be organized by other scientists so that natural gas components can be separated for different industry use. Petrochemicals, useful in making detergents, paints, drugs, or fertilizers, are extracted. Contaminants like dirt and water are removed. Hydrocarbons like propane and butane are separated.

Natural gas can then be safely stored in tanks or in prepared underground storage caves. When natural gas is needed, it’s fed into a network of thousands of miles of underground pipes, and propelled to its many destinations at about 15-20 miles per hour, with stations along the way using the resource.

Natural gas – millions of years in the making – your resource in an instant at the touch of a dial, thanks to the many facets of the gas industry!